Tresillian’s Centenary in 2018 celebrates one hundred years of history as Australia’s leading child and family health service. Formed in 1918, as The Royal Society for the Welfare of Mothers and Babies, Tresillian has supported generations of parents during the early days of their baby’s life, providing reassurance and building confidence.

Founded at the Sydney Town Hall, on 4th November, 1918, the Society was a NSW government initiative sparked by soaring infant mortality rates and a desperate shortage of health services for new mothers.

The need for intervention was exacerbated by the First World War, which left many young mothers widowed. In the same period around 58,000 babies lost their lives through poverty, disease and lack of hygiene. The Society’s primary aim back then was to make a difference to the high mortality rate of children under the age of five. In 1919 the Society was incorporated by an Act of Parliament in New South Wales. Then in 1921, Queen Mary became the Patron of the Society, until her death in March 1953. On 4th August 1954 Queen Elizabeth II, who had just visited Australia, became the Patron of the organisation.
The Society initially responded to the problems at home with a community education program for parents of small children.

The Society’s other aims as outlined in the 1920-21 Annual Report, were:

In 1921, Dr Margaret Harper, the first Medical Director led the establishment of an Infant Welfare Training School at 2 Shaw Street, Petersham. It was, in fact a post-graduate training school for nurses wanting to specialise in mothercraft and a home where difficult infant feeding cases could be cared for, and breastfeeding established, where possible. Nurses came from all over Australia to attend.

A baby clinic for parents also opened where mothers could bring their baby to be assessed and checked. The clinic at Petersham had been named “Tresillian” by the previous owners who originated from the village of the same name in Cornwall, England and from then on, the Royal Society for the Welfare of Mothers and Babies became affectionately known as “Tresillian”. When the Willoughby Centre was purchased in 1927 the name was retained and this Centre became known as Tresillian North.

By the mid-1920’s the infant mortality rate had fallen to 3% from a peak of over 10% just a few years earlier. As times changed, Tresillian’s scope adapted and broadened with specialised nursing, medical and psychological support available on site and across mediums such as the internet and on the telephone.

The primary goal of Tresillian today remains unchanged: that of securing the best possible life and future for young Australians. With close to 100 years of invaluable service for young families across New South Wales, Tresillian has played an important and unique role in the history of New South Wales. These days Tresillian has Family Care Centres across New South Wales at Willoughby, Wollstonecraft, Penrith, Belmore, Wagga Wagga and Lismore and in Victoria, at Albury Wodonga. With a range of services including parenting programs, counselling and one on one advice, designed to provide professional support for families with a baby, toddler or pre-schooler.

A number of exciting events are planned this year. We invite you to celebrate the diverse history and heritage of Tresillian. Our interactive timeline will also provide you with a wonderful insight in to Tresillian’s past, present and future.

END_OF_DOCUMENT_TOKEN_TO_BE_REPLACED 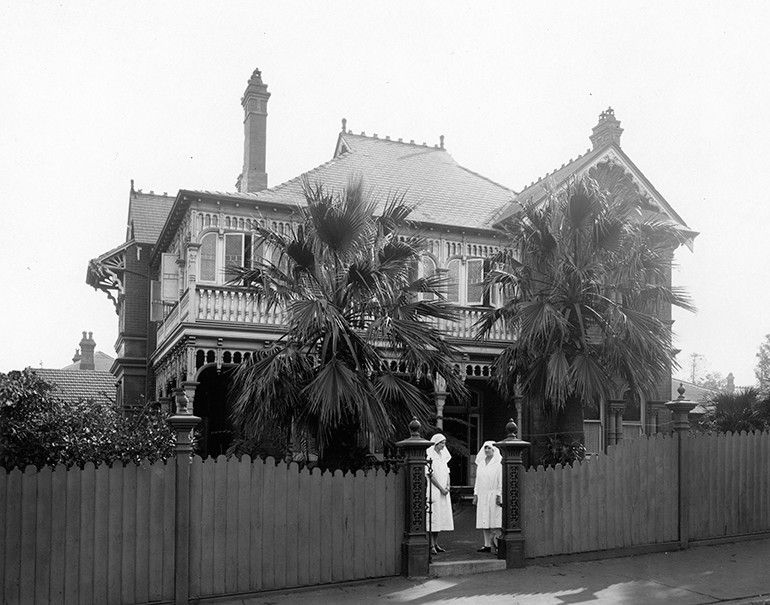 The Royal Society of Mothers & Babies was set up to co-ordinate the efforts of many NSW charitable and Government agencies working in the field of infant welfare during the post war period. At the time, the infant mortality rate was so high, that while during the First World War 55,000 men were killed in battle, the country also lost around 58,000 babies. 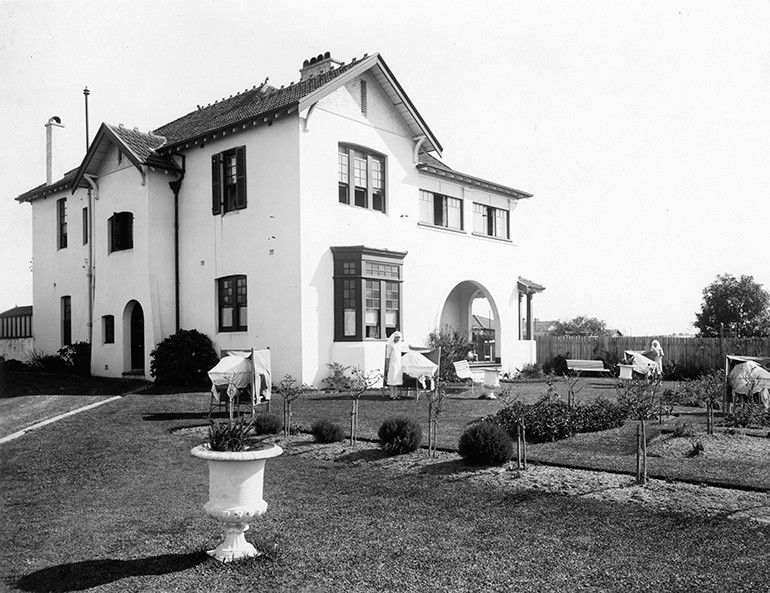 In order to serve the growing needs of people living on the North Shore from Hornsby to Manly, a Mothercraft training school was established in northern Sydney. 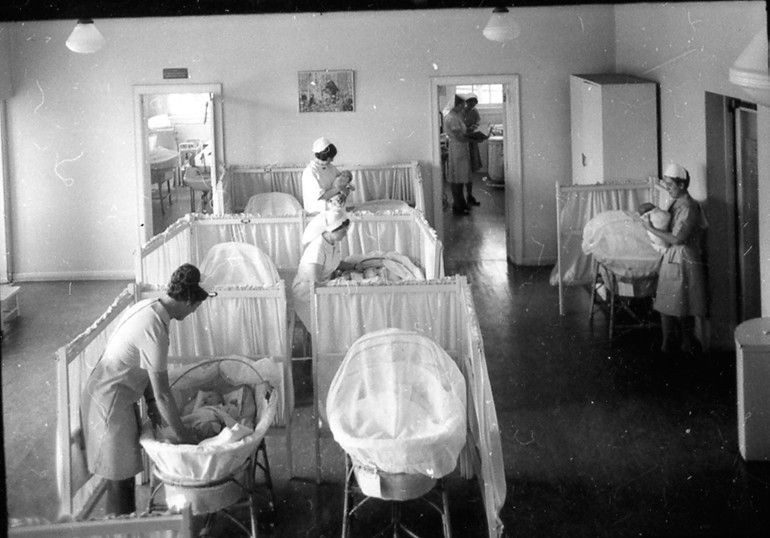 The way we were!

During this period the Society opened another training hospital in Greycliffe House, Vaucluse, which Council Member, Dr Morris, was largely instrumental in securing. 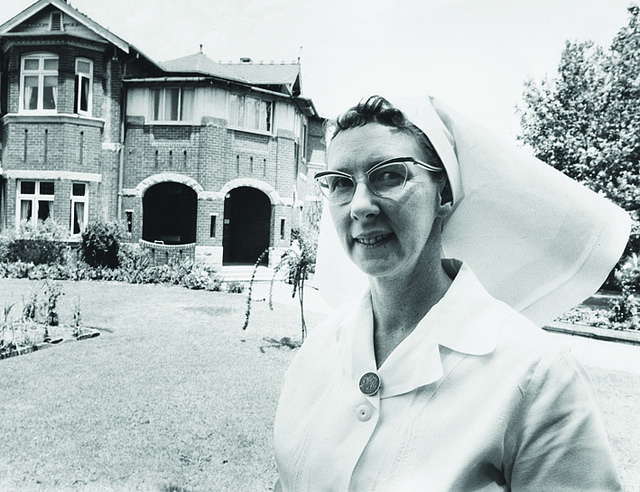 At the special meeting of Tresillian Council held on July 30, 1940, the proposition for the Society to take over the administration of the Carpenter Mothercraft Home at Wollstonecraft was approved on behalf of the Hospital’s Commission. 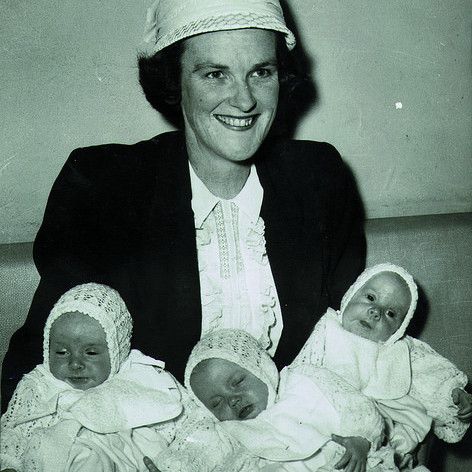 Twins & Triplets were often at Tresillian

The role of the husband in child-rearing was rarely mentioned in official documents on Tresillian up to this time but by the mid 1950’s, it was reported. 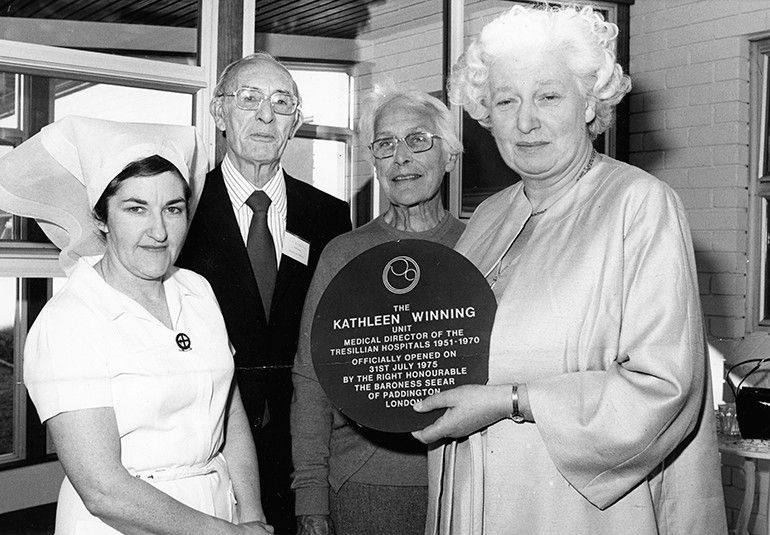 A visit from the Baroness to Petersham

Perhaps the most significant event of the 1970’s was the visit to Tresillian Petersham of Baroness Seear of Paddington, London in July 1975. 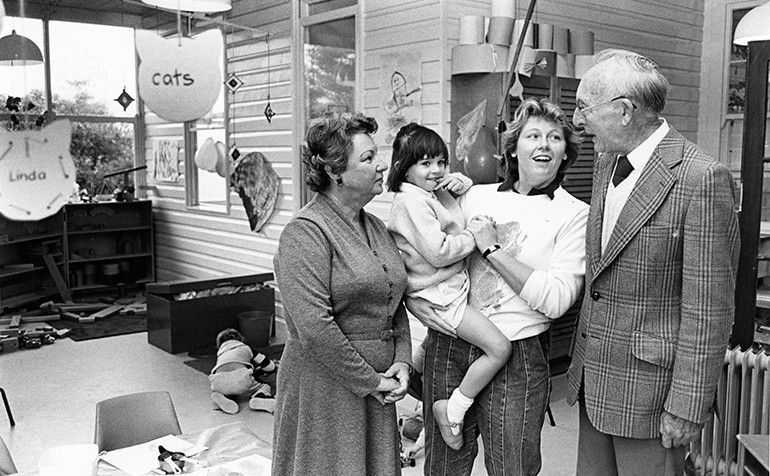 By the 1980’s it was evident that the Tresillian Council very much understood the changing needs of the community and adjusted their strategic plan accordingly reviewing all service delivery. While infant and maternal welfare was the original impetus for the Society’s establishment, changes in healthcare, the role of women, families and childcare all extended the functions of Tresillian. 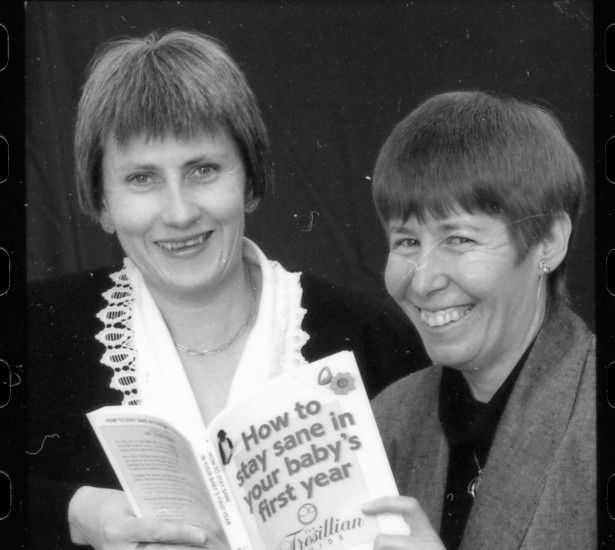 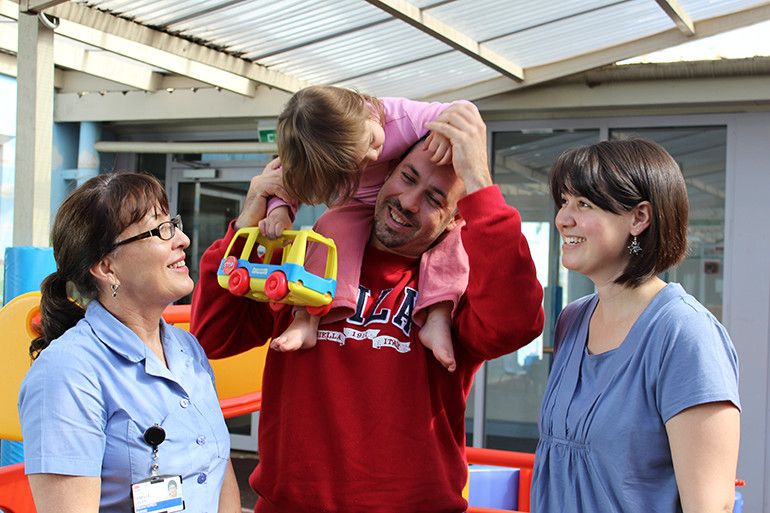 Families are our focus

Tresillian continued to respond to the changing times and needs of parents and in the year 2000 launched a new website, www.tresillian.net.au. The site featured a comprehensive description of services and tips for parents on a range of topics. 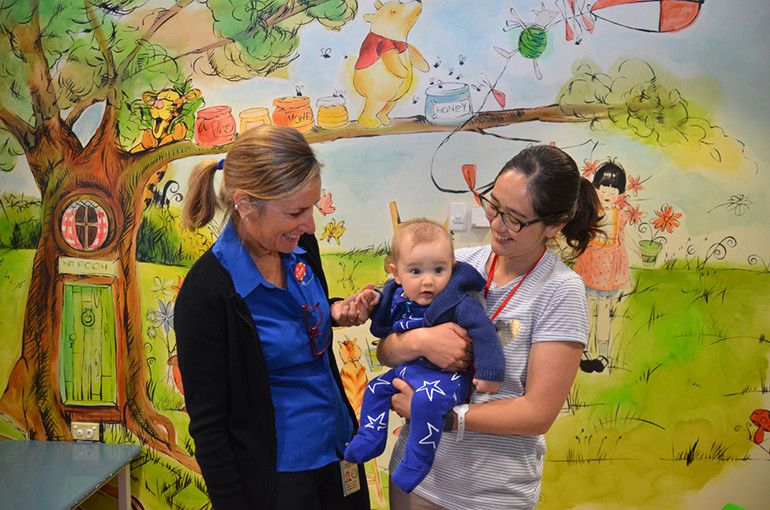 After consultation with the many health professionals referring families to Tresillian, it was decided to introduce a centralised intake system, to streamline referrals. Director of Nursing & Clinical Services, Anne Partridge led the implementation of this initiative that meant referrals were processed more efficiently. While this helped curb the long waiting lists at all Centres, the length of residential stays was also reviewed and standardised to 4 nights, 5 days at all Centres to enable more families to be admitted. This strategy was received positively by referrers and parents and remains in place today. 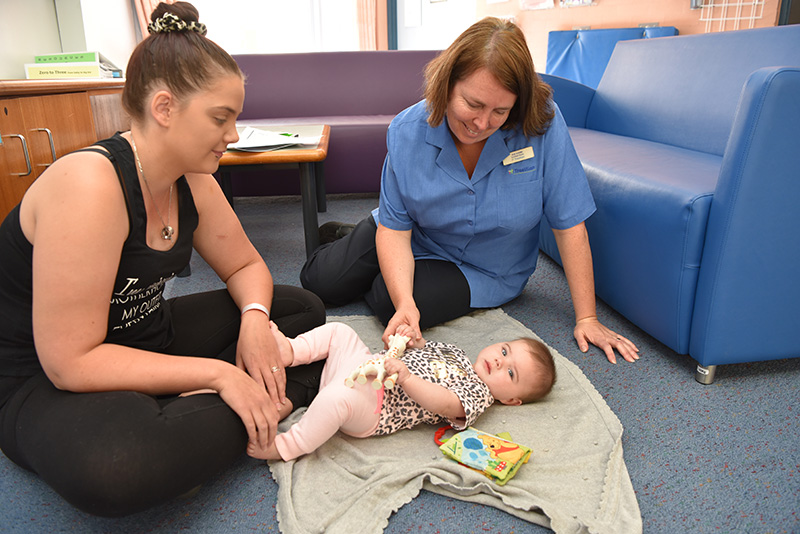 Today Tresillian is Australia’s largest Early Parenting Service with 14 Family Care Centres across New South Wales, Victoria and the ACT along with a Tresillian 2U Mobile Early Parenting Van operating on the Mid North Coast of NSW. Programs include Day Services, where families visit a Tresillian Centre for a morning/afternoon or receive a visit from […]

You’re an important part of our history and we’d love you to share your ‘Tresillian’ story with us.
You may have called on Tresillian for help with one of your children or you may be a past or current staff member or student? We want to hear about your experiences.

I wanted to say thank you for the service I received yesterday on the Parent’s Help Line. It was a call back from a lovely nurse. She gave me a range of options with the advice of working out a plan that would suit the whole family. My husband and I were able to quickly agree on the best way to help our youngest, a 3 year old with long standing sleep issues. I found the nurse very respectful of our personal beliefs and family situation. She treated me kindly and was very non-judgemental in her approach. She is to be commended for representing your organisation well.

Thank you so much for all of your expertise and wonderful support over the past few months. The Canterbury Day Stay service was amazing and helped us so much. We are all eating and sleeping better now!

We have just got home from Tresillian Nepean with our 6 month old. Our stay at Tresillian made the world of difference in breaking habits, which we had tried and tried to do already, and gaining confidence. A bit of work to go still but I know we will be able to persist and reinforce the skills we learnt. Thank you, the stay at Tresillian has already made huge improvements in my sanity and our relationship!

It has been a week since our stay at Tresillian and things are going well for our 10.5 month old baby.  She is now sleeping in her cot and sleep times are now peaceful for her, my husband and myself.  I now wait for her to wake up since I’m able to do  more things while she’s asleep!  From the Parent’s Help Line to the residential staff, everyone was very helpful, understanding to our needs and situation, and patient.  Thank you very much.

We stayed at Tresillian Willoughby a few weeks ago and it was an absolutely life changing experience for us. My husband and I had been struggling with our newborn. We had great difficulty settling, and getting her to sleep anywhere that wasn't on us. The staff were so patient and caring in teaching us skills we could take away to change our lives when we went home. The staff made us feel completely at home in the facility, it almost felt like a family when we were there. One staff member in particular, Emily, was absolutely incredible. The time and patience she had for myself and my husband, sitting with us while we asked thousands of questions, reassuring us when we tried to settle our Bub was above and beyond. We left with some confidence and knowledge that we could survive life with a newborn. It was the most amazing experience. Thank you Emily and the staff at Tresillian Willoughby. 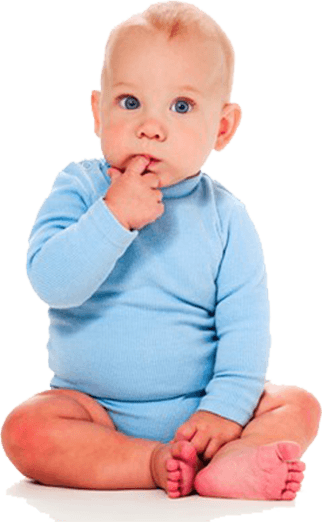